The South Fork of the Holston is easily accessible at the Virginia Department of Wildlife Resources (DWR) Buller Fish Cultural Station located in Marion, VA, and this stretch has two special regulation sections (below and above the dam on owned by Buller). Before venturing into this section of the river, I had heard many exhilarating stories from friends and trout junkies who had landed some of the biggest fish of their Virginia careers in these waters. Having heightened expectations before fishing new waters can lead to serious disappointments, but I can attest that the South Fork lived up to the hype!

Before hiking four hours from Richmond to Marion, Virginia, I did my research and learned a lot about the type of fishing I would do on the South Fork thanks to The DWR report. The video shows the results of the DWR’s annual fish population survey at Buller Hatchery and provides evidence of the size of brown trout and rainbow trout in this section of the river.

With cooler air and water temperatures in the area this time of year, I knew I would be deep fishing with nymphs and small gnats to be successful. Personally, I love to fish large sandfly nymphs with rubber legs (i.e. Pat’s Rubber Legs or Girdle Bugs in size four or six) above a small red zebra midge in size 18 or 20 during the winter months here in Virginia. I tried my traditional setup and placed an adjustable indicator above my flies to make sure they were sinking deep to where the fish hang out in cooler waters. I was lucky to have a sunny 55 degree day when I visited the South Fork and no sign of anglers in the parking lot when I arrived.

My plan of action for the day was to start above the Buller Hatchery Dam and work your way up the four mile section of special regulation water. A convenient fishing trail follows the river upstream so maneuvering through each section was no problem. I worked every section of runs and rapids from the shoot-off and was surprised to find very little action. I noticed a few fish turning into small blue-winged olives near the banks of small tracks, but could not attract any catches with small dry flies attached. I returned to my nymph rig for most of the morning, but found the heavier nymph rig difficult to fish effectively with such low water levels, and I ended up spooking a few fish under the rocks as I headed up river.

As afternoon approached, I was getting wary of landing a trophy fish and any fish at this point, so I decided to make one last push in the Buller Fish Hatchery section of the river. downstream of the dam. I carefully worked downstream casting my favorite nymphs and even some big jointed streamers, but continued to have no success. With time being short, I came across a section of the river that had a deep pool under a rapid rapid.

Sitting a few yards past the rapid, I noticed about eight larger trout grouped together subtly feeding below the surface of the water. The deepest part of the run appeared to be at least eight feet deep, and every moment a handful of larger fish appeared on the bottom. I also noticed a massive stationary trout in the deep section, and decided to expend all my energy and focus on getting this fish to take one of my nymphs.

As I drifted my nymphs past the fish, I was frustrated to find the fish uninterested. Switching methods, I pulled out my biggest streamer and furiously skinned the minnow back and forth in front of the trout. However, I was unlucky! As I was hesitating to put my nymphs back on, I decided that maybe a little extra weight could get the flies down faster and more efficiently to scare the trout into biting. I added the biggest split shot of my bag and landed a throw five feet in front of the trout. With my eyes hyper focused on the trout, I saw his head move to the left and towards my fly.

Before I knew it, my indicator was sinking and the hook was in place. The fish raced upstream and nearly ripped the rod out of my hand. After a few tough runs around the submerged trees and down to the bottom of the deep pool, I hoisted the fish to the side and scooped it into my net!

The trout exceeded my expectations and really shocked me with its size, bright orange and yellow colors and distinct hooked jaw. I did my best to snap a photo of this giant brown, but my selfie camera and the solo nature of the trip limited its true potential. 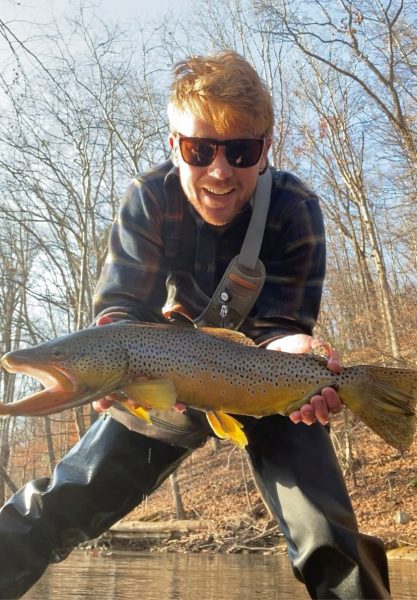 While the Holston’s South Fork can be a bit more challenging than expected, its small waters breed big trout that can really surprise you and give you a lifetime of your trout fishing career. I feel lucky to be surrounded by such crystal clear waters and can’t wait to hear about the next great adventure on the trophy section of the South Fork!

Originally from Richmond, Andrew has a passion for fishing throughout Virginia and previously worked as a fly fishing guide at A Bar A Ranch in Wyoming. He also runs the @rvajamesriverfish Instagram account which promotes fishing on the James River in the Richmond area.