As rumors spread that Sri Lanka’s former prime minister had locked himself in a naval base after being forced to resign due to the island’s crippling economic crisis, Facebook posts shared thousands of times showed pictures of a flotilla of boats that allegedly circled the area to stop him. leave the country. However, the photos actually show fishing boats in eastern China’s Zhejiang province.

The post, shared on a Facebook page with more than 100,000 followers, shows several photos of boat fleets.

Mahinda Rajapaksa, the president’s brother, resigned as Sri Lanka’s prime minister on May 9 after his supporters attacked anti-government protesters who had been protesting peacefully for weeks.

After being evacuated from his official residence by the army, rumors circulated that he had taken refuge in a naval base in the eastern town of Trincomalee. Sri Lanka’s defense secretary later confirmed that he was indeed staying there “for his safety”, local media reported.

A court has banned Rajapaksa and more than a dozen allies from leaving the country after ordering an investigation into the violence.

The country of 22 million people is going through its worst economic crisis since independence with severe shortages of food, fuel and medicine and long power cuts.

The photos have been shared more than 2,500 times in similar Facebook posts here and here.

Some social media users appeared to believe the photos showed boats gathered together to prevent Rajapaksa from leaving the country.

“Excellent well done boys! Don’t let the robbers of Rajapaksa get away,” one comment read.

Another wrote: “Be careful boys. More strength to you. Don’t let them go.”

Reverse image searches found three of the images shared in the misleading posts published in an article by China’s state-run newspaper People’s Daily on April 30, 2022.

Wenling is a district city in Zhejiang Province, southeast China.

“On April 30, 2022, the central fishing port of Ruoshan in Wenling City, Zhejiang Province was full of fishing boats that returned at the start of the sea fishing moratorium,” the article said.

Below is a comparison of the images in the misleading posts (left) and the People’s Daily photos (right): 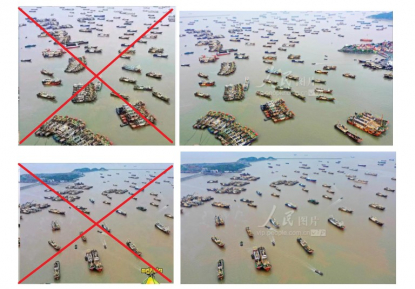 Another image in the misleading posts was shared in a Facebook post about fishing boats in the city of Taizhou.

Taizhou is a major city in Zhejiang which encompasses Wenling.

The photo is part of an album shared by the Sinhalese service of China Radio International (CRI) on May 10, 2022, which is captioned in Sinhalese: “Recently, fishing activities were suspended in China for about four months and half. About 2,144 fishing boats that have resumed operations were seen returning to the port of Taizhou city in Zhejiang province, one by one.”

Below is a comparison of the image in the misleading posts (left) and the photo posted by CRI (right):

Similar scenes can be seen at the start of a video report from local broadcaster Taizhou Yixian on May 1, 2022 about the summer fishing ban.

People’s Daily published similar photos in May 2019 in a report on the start of the summer fishing ban in Wenling.

Below is a screenshot comparing the photos of the misleading posts (left) and those published by People’s Daily in 2019 (right), with the corresponding characteristics indicated by AFP: 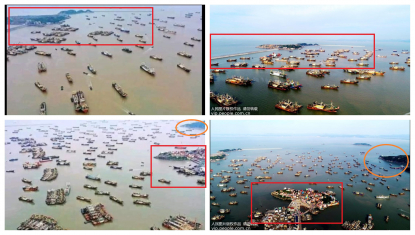 Comparison of screenshots of photos of misleading publications (L) and those published by People’s Daily in 2019 (R), with the corresponding characteristics reported by AFP

AFP has demystified a wave of disinformation surrounding the economic crisis in Sri Lanka.